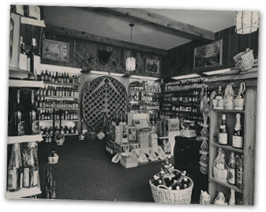 The Buscemi success story had its beginning in 1955
when a Detroiter, by the name of Paul A. Buscemi,
acquired a small party store with very little capital
but a lot of determination. A short time later, he
began the present day Buscemi fast food line with
the inception of his own version of the East Coast
hoagie sandwich. Being the first to introduce the
Italian submarine sandwich to the Detroit area, he
realized his first success. The names “Torpedo”® and
“Baby Sub”® were given to the sandwiches that management believes were,
and still are, the finest Italian Submarine sandwiches on the market today.
As the sandwich caught on, Mr. Buscemi directed his efforts toward the
creation of home style pizza. After years of experimentation with dough,
sauce, and other ingredients, he perfected what Management believes is
today the most delicious Italian pizza available in the fast food market
anywhere.

Meanwhile, Paul’s son Anthony had finished school and joined the family
business. Taking a fresh look at their operation, father and son saw that
the distinctive characteristic of Buscemi’s was, quite simply, the quality of
the food, the number of successful years in business and the reputation of
their Buscemi’s Party Shoppe. Paul and Tony Buscemi formed the Company
in 1974 to start franchising their business, and were the first company to
franchise the Party Shoppe concept n Michigan.

There is no doubt as to the benefits a storeowner in a one-store operation
could derive in entering a Buscemi’s License program. These benefits
include: better buying power, several additional profit centers, marketing
and advertising expertise, and a more than 50 year reputation for selling only
the highest quality food products.

The Company today offers the qualified franchise buyer a concept that has
been tested, refined, and perfected the way Paul Buscemi perfected his
recipes. Paul and Anthony won’t settle for being “just another pizza
franchise”, any more than Paul would settle for serving “just another Pizza’.